With all due reverence to Shakespeare, there is a better piece of theater to be discovered here, and any number of better ways to give the work, the worker and the product the justice they deserve.

A Search for the Untold Story of “The Moor of Venice.”

Why was he “The Moor of Venice” anyway?   Was that what the Venetians called him?  Was it a title of honor…or a slur?  And how did it make him feel?  What would it make him think…or do?

Untitled Othello is an adventure in theater-making that aspires to center the African-descended hero in the play of William Shakespeare’s that bears his name…or is it his name?

This exercise in creative justice, employing ensemble-based creative practices engaged in deep and sustained exploration of Shakespeare’s text, will seek to provide dimension to the title character of Shakespeare’s play by providing dimension to all of the characters that people the world wherein his story unfolds, thus revealing a plausible black hero’s journey that Shakespeare left us too few and also perhaps too many words to illustrate.

From a performative standpoint, Othello’s journey, and thus his play, can be no more plausible than he and the characters that conspire to compel his narrative are human.  Animal nature, at its core can be grotesquely simple, and humans are animals.  But combine it with the intricacies of psyche and you have a thing of infinite complexity that cannot be simply portrayed, particularly in a play where the machinations of many minds and hearts conspire to culminate in the tragic conclusion.  To tease out the humanity from between the lines of an early modern text—even Shakespeare’s, who left us far more than any of his inferior contemporaries—cannot be accomplished in any 3 to 5 week rehearsal-to-stage production model.  In fact, in this particular of Shakespeare’s plays, so often done and so seldom done justice, where the stakes are nothing less than the realistic depiction of love, hatred, mental illness and most important, black male integrity, public performance cannot be a concern at all.  Rather we must seek to provide actors and their creative collaborators the privacy and the leisure to take deep, revelatory dives into all of their unflattering human nature with no pressure to create a stage-ready performance.  Only in such a process of exploration and discovery can we hope to find the rendition of Shakespeare’s play that isn’t the Anglo-American recycling  of the ridiculous Elizabethan tale turned racist trope told and embraced for generations.

Why is this project called “Untitled Othello?`` + -

There are titles and there are titles…  There is the title of Shakespeare’s play, The Tragedy of Othello, the Moor of Venice.  But considering who it is who has the vast majority of lines to speak in that play, it seems as though it might more accurately be titled The Triumph of Iago, the Genius Villain of Venice, with Othello, the character, as nothing more than prop or set piece.  “The Moor of Venice” is of itself a title.  Is it a title that the character wears proudly, or one that he is labeled with by others for reasons of their own irrespective of what he would prefer?  And is he the only Moor in Venice?  The title would tend to make it sound as if he is.  And if he is not, how much more of a pejorative does the term become, like “the Chinaman” or “the Jew?”  Then there are titles like “General.”  Are there other “generals?”  And if so, what power precisely does the office hold in the context either wherein it was written or now?  Does the title, General, suggest some sort of societal position of status as well?  Is Othello some form of nobleman, or just a hired soldier with no real power beyond his ability to prosecute military conflicts?  Then there is his name, which is also a title.  Is it his surname or his given name.  Is it actually his name at all, or just what he was dubbed over time as his actual name was always too difficult to pronounce?

Rather than having to work under the burden of all these titles that define the character and the play by the age-old assumptions they generate, I suggest we do away with all of them and start with nothing.

Is this a production of Shakespeare's play, Othello? + -

NO!  We are neither rehearsing nor producing a play at this time.  A production of Shakespeare’s play Othello in America, under contemporary professional production standards, is never, nor can ever be, anything but a recycling of toxic ideas regarding a white societal relationship to Blackness perpetrated by a four hundred-year-old English playwright and embraced by generations of educators, scholars, and theater-makers, inadvertently or otherwise, to maintain structures of white supremacy.  We are not attempting to mount a production of Othello, rather we are doing the deep and extensive exploratory work to ascertain whether there is a production of this dangerous play worth the consideration of ever mounting again.  Untitled Othello is a diverse group of creators in process, not production.

Foremost, Untitled Othello is for us, the creators.  We are a diverse collective of actors, directors, dramaturges and thinkers who all believe there is personal value in finding ways into this difficult play at this difficult historical moment which, if we are able, will serve as a template for the making of more socially just and thus more relevant American theater.  After ourselves, Untitled Othello is for every theater-goer, every theater student and theater artist  who never again wants to see another of Shakespeare’s plays stuffed through the sausage grinder of product-oriented American theater-making processes to be packaged and sold to the public, a mediocre, white-minded homogeneity masquerading as art.

Because theater has ever influenced the flow of history.

Because if anything ever changes it is because we strive to change it.

Because, like everything else in the evolving American culture – which might just evolve itself to death before much longer – it is only in the very briefest  and most recent of American history that any significant number of Black minds have been consulted on approaches to dealing with issues of racial bias, much less on this particular of the manifestations of racial bias, what theater should be made, how it should be made and who should be included in its making.  This does not even begin to consider the cultural capital of Shakespeare and the death grip that the American theater elite continue to hold it in.  There seems no better time to experiment with the possibility that we can explode all of this in our human-centered explorations and, if nothing else, create a new starting point when discussing whose art and perspectives matter.

These reflections are meant to offer an understanding of not only project purpose, but at least one Black actor’s perspective of why a project at all.

1. You Can’t Outrun a Foregone Conclusion

2. The Most Plausible Option?

We began with the newest Arden edition.  We assembled a cast of the nine core characters in the play and they read it.  Then we reconfigured the cast, switched out some actors, repositioned others, and in another week or two we read through the play again.  Then we did it again.  In the end there were seven different cast configurations for seven different readings.  Each time there were new energies, new dynamics, new discussions.  Over the course of a couple of months we arrived at the cast that seemed to most organically come together.  We’ll see.  But I was thrilled not to be involved in some three-day casting session followed by some three-week rehearsal process.  Perhaps for all of this time spent we’ll find nothing new, but we’ll at least know there’s probably nothing new to find. 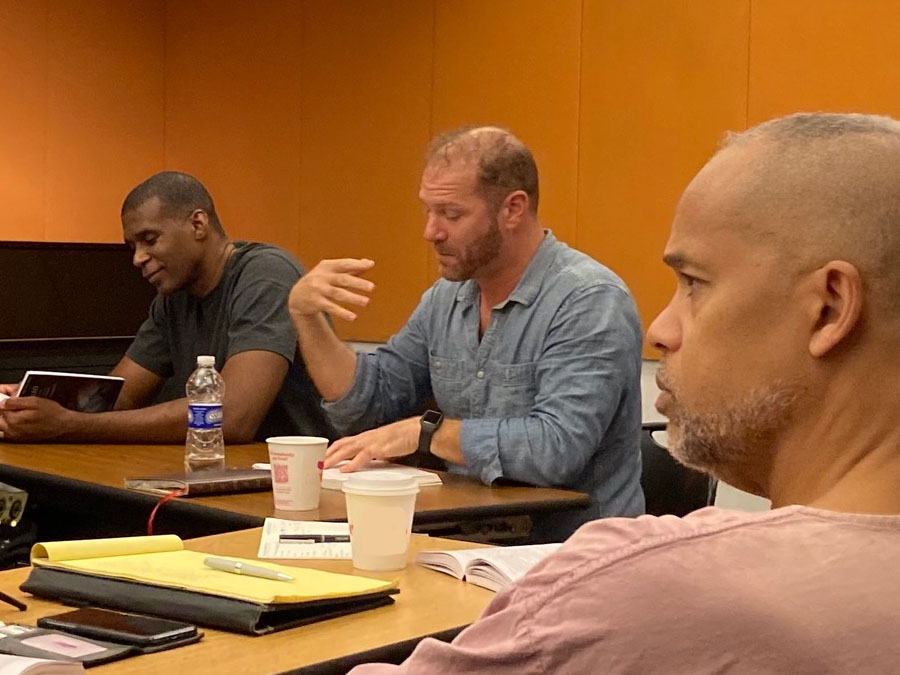 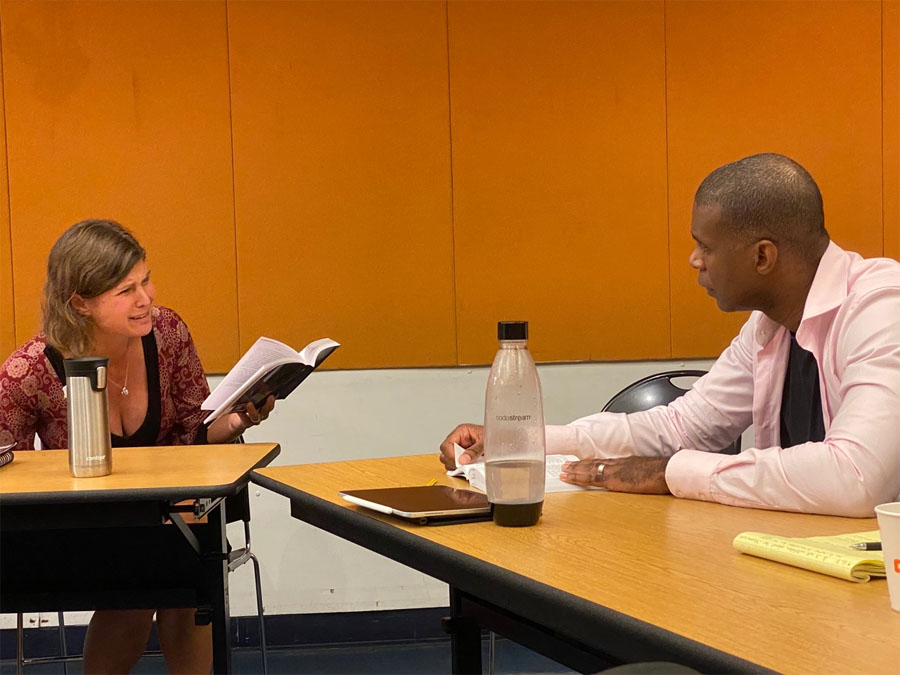 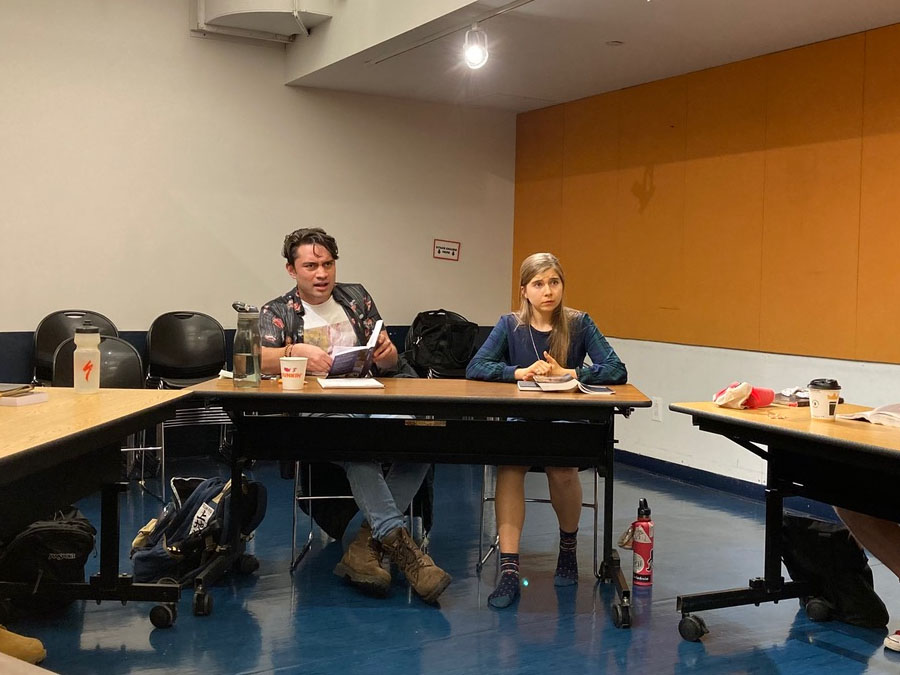 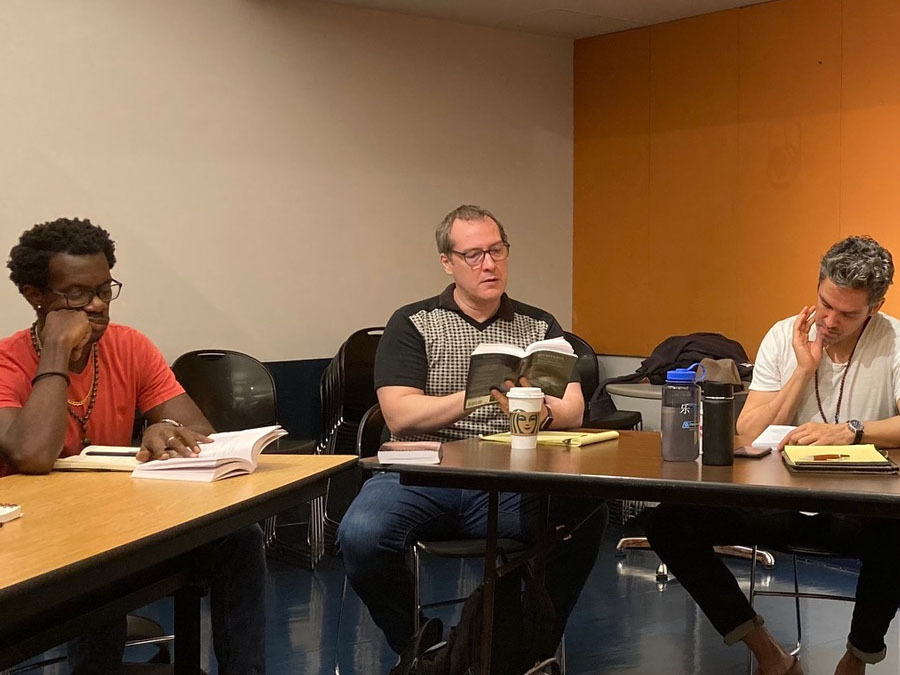 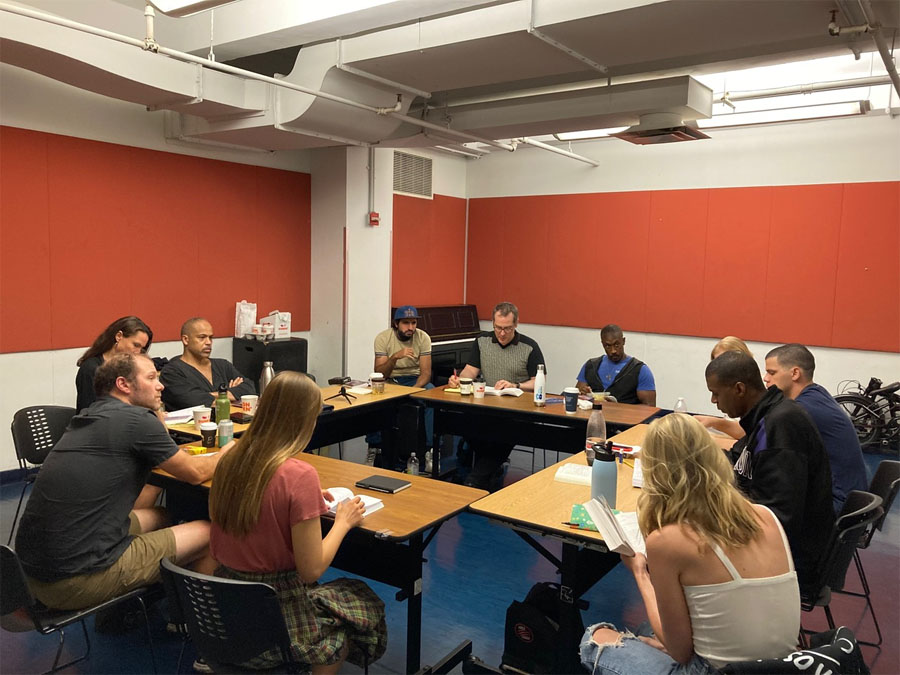 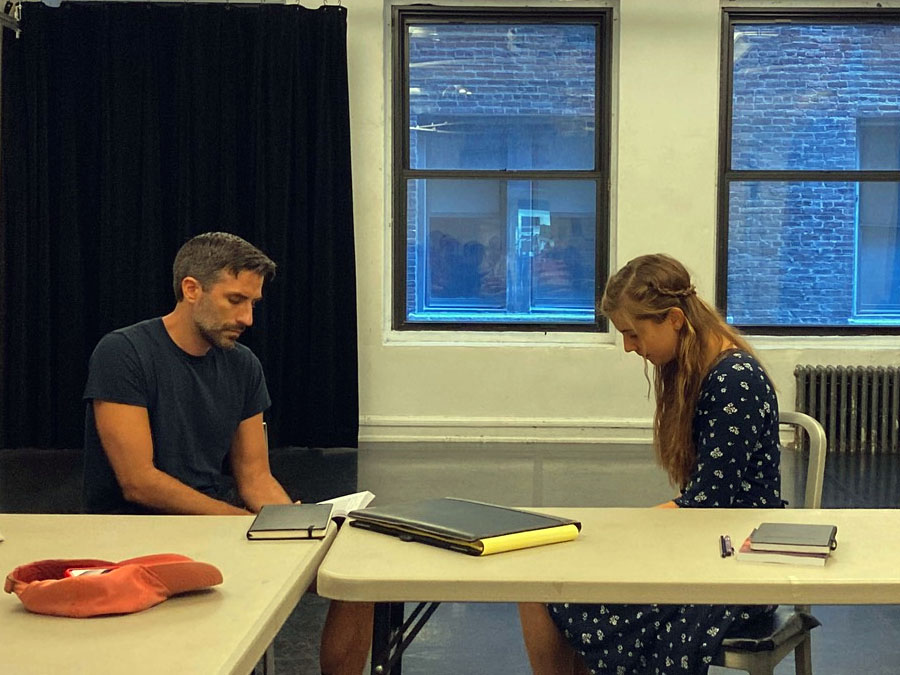 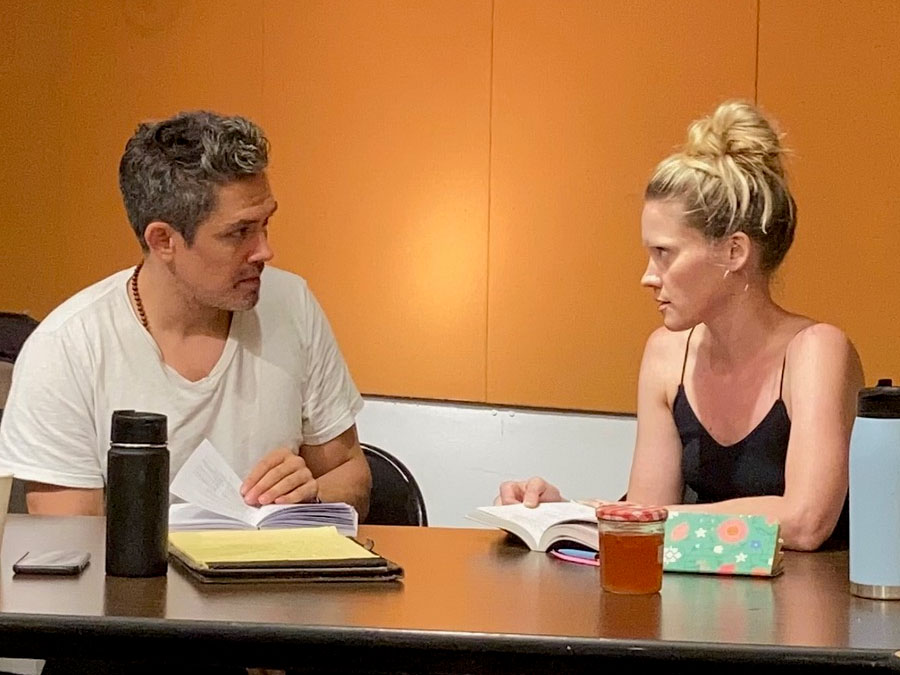 This exchange between Keith Hamilton Cobb and Stephanie Hodge followed two table readings of the Arden Third Series (Revised Edition) of Shakespeare’s Othello (Bloomsbury, 2016) where Stephanie was cast as Desdemona in the 1st, and as Bianca in the 2nd for the “Untitled Othello Project,” July, 2021.

Midnight Oil Collective is a creator-led arts investment, development and production group. Exhausted with navigating the gate-keepers of institutional art-making, we employ an innovative, democratic business model and a creator centered development process to empower creators and ensure that the profits of their labor go back to the creators themselves, rather than to outside investors. Our creators work collaboratively—be it in theatre, film, music, or academia—sparking conversations around their work while remaining true to their overall artistic visions. By engaging artists and supporting their diverse visions through to fruition, we will generate highly diverse, original art that resonates across broader audience spectrums.

Blessed Unrest is in its 20th season of generating original theatre in NYC and touring internationally. They create safe environments where dangerous things can happen, producing dynamic, disciplined, and exuberant new works for the stage with their culturally diverse ensemble. They teach their approach to physical and devised theatre at universities across the country. Among their awards are four New York Innovative Theatre Awards (twelve nominations) including the Cino Fellowship for Sustained Excellence, the LPTW Lucille Lortel Award, and first prize at the 2016 Secondo Theatre Festival (Switzerland). The company’s work has been praised for “magnetism and electricity” (TimeOut NY) and “physical ingenuity and visual artistry” (NYTheatre.com). http://blessedunrest.org

Keith Hamilton Cobb (Director) is an actor drawn mostly to the stage in his working life, but is also recognized for several unique character portrayals he has created for television.  He is a graduate of NYU’s Tisch School of the Arts with a BFA in acting. His award-winning play, American Moor (published by Methuen Drama), which explores the perspective of the African American male through the metaphor of Shakespeare’s Othello, ran off-Broadway at Cherry Lane Theatre in the fall of 2019.  It is the winner of an Elliot Norton Award, an AUDELCO Award, two IRNE Awards, and is part of the permanent collection of the Folger Shakespeare Library. AmericanMoor.com

Jessica Burr (Artistic Director: Blessed Unrest, Associate Director: Untitled Othello) has been honored with the 2019 Kennedy Center ACTF Commendation for Distinguished Leadership, First Prize at the 2016 Secondo Festival (Switzerland), the 2011 LPTW Lucille Lortel Award, and NY Innovative Theatre Awards including: Outstanding Production, Choreography/Movement, and Caffe Cino Fellowship Award among eight total nominations. She was a featured panelist in the 2016 Brave Summit, a forum of women leaders, experts, and scholars to drive cultural change. The founding artistic director of Blessed Unrest with whom she has directed and choreographed over 20 productions (14 world premieres), she directs, choreographs and teaches at theatres and universities around the world. http://JessicaBurr.net